I recently shared a bit of my childhood with you regarding the “super-bed” and Indiana Jones.  Well, another favorite movie among my siblings while enjoying ice cream on the super-bed, was the Musical: Joseph and the Amazing Technicolor Dream Coat with Donnie Osmond. What a dreamy voice! If you haven’t seen in, you should!

We would watch it most days of the week when vacationing at a family friend’s cottage during the summer, so I’ve memorized all of the words.  Now, anytime I read Joseph’s story, I find myself humming or singing to songs.  It makes reading it even more enjoyable and puts a face to the characters.

Joseph’s story is one of my favorites in the Bible.  I’m sure you will understand why soon.  There is so much to learn and apply from it!

I’ve heard this story many times growing up.  I’ve also seen the musical (which is excellent!).  This time, I wanted to catch something new from it.  I wanted God to change my perspective and give me a fresh view on a well-known story. Here is what I got:

1. First, Joseph rose wherever he was planted. He could’ve just done the bare minimum at his job and then gone home, or sat in a jail cell, day in and day out.  But like Jacob, he fought for his destiny.  He did his absolute best serving and managing wherever he was.  He thrived, and built a solid reputation and skills from the bottom up – twice! Joseph did his tasks so well that the people in charge didn’t have to worry about a thing.  They completely trusted him.  He took every opportunity and used them to grow, serve, and use his gifts wherever he was.

Also, like Israel, God fought for him.  He had his hand guiding Joseph, giving him the resources he needed and putting the right people in front of him.

I know how to live on almost nothing or with everything. I have learned the secret of living in every situation, whether it is with a full stomach or empty, with plenty or little. For I can do everything through Christ, who gives me strength.

Prison wasn’t necessarily an ideal place to live and work, Joseph did want to get out; but that longing and waiting didn’t stop him from growing and serving. He learned to live in any situation, with God as his anchor and hope and guide.

3. Joseph kept serving even after a disappointment.  He has a glimmer of hope when the cupbearer goes back to Pharaoh.  But he has to wait because the man completely forgets about him. But Joseph keeps on doing what he’s doing. We never read of his faith wavering.  He stays patient, expectant, and effective in his waiting.  He allows God to continue to use him because he has an open heart and a servant’s attitude.

What areas in your life are in plenty?  What are in want? Is God asking you to wait or move?  Are there ways that you could better serve in your waiting?  What could God be teaching you or preparing you for?

It can be challenging to wait, day after day.  But if we don’t look beyond our current situation, if we stay stuck and focused on it, we may miss the opportunities for God to use us during those waiting periods.  We have to make the most out of every opportunity to serve God whether we are in plenty or in want. Also, whether we are waiting or in motion. Waiting is part of the journey oftentimes, and we can still be active and productive.

Ponder that for a minute.  Do you agree with that statement?  How does that change your perspective?

and expectantly.  I want to be ready for whatever God has for me next.  I want to serve those around me, even though I feel that I’m not completely in God’s unique purpose for me yet.  I have hope that it will all come together.

God, thank you for Joseph’s story.  I am so encouraged to press on when I read it.  It reminds me that you are always working behind the scenes, taking the good and the bad that happen our lives, and redeeming them into a beautiful life.

God, I pray for those of us in a waiting period in life.  It’s difficult to see what you have going on for us and a potential purpose.  I pray that you would so us how we can better serve and grow during this time.  Would you open up pathways and resources that prepare us for what you have next?  Thank you for all that you are doing behind the scenes.  Amen. 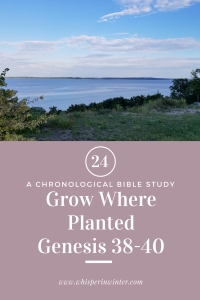 One thought on “Grow Where Planted”